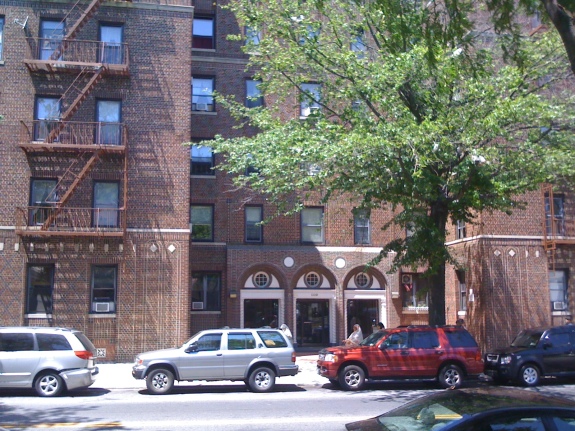 You know how Brooklyn is now cooler and hipper than Manhattan? Well, that’s about 45 minutes north from where we live. A while ago, I searched for farmers’ markets in my area, and came across this site that lists one just a short 15 minute walk from my home. I practically dismissed it, though, thinking something so close could not possibly be that enticing. I visited the Union Square farmers’ market a few times, and although that was fun, trekking back on the subway with a huge, heavy bag, and banging into people with my protruding baguettes, was not.

So, two Sundays ago, I finally gave my own neighborhood market a go. The directions I jotted down from Google Maps (my best friend in this foreign city) had me make a sharp right off of the bustling, slightly grimy boulevard which makes up most of my walk to the subway, onto the most lovely tree-lined street. The trees offered me ample shade as I admired the manicured lawns and wrap-around porches of the houses, each a different pastel hue. Although I’ve never been to the South, this is pretty much how I imagine it. 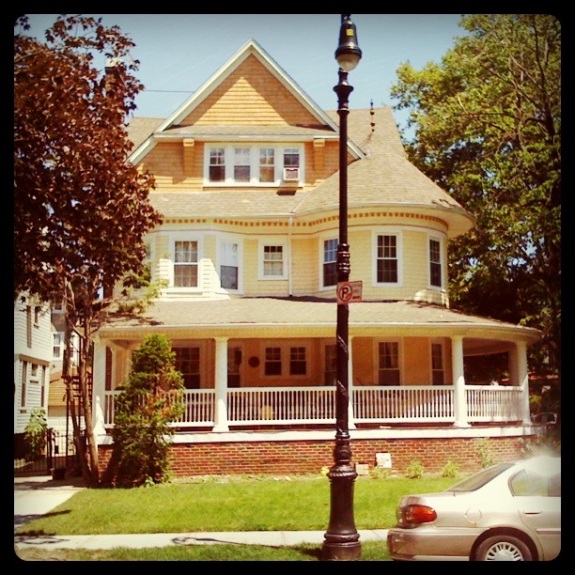 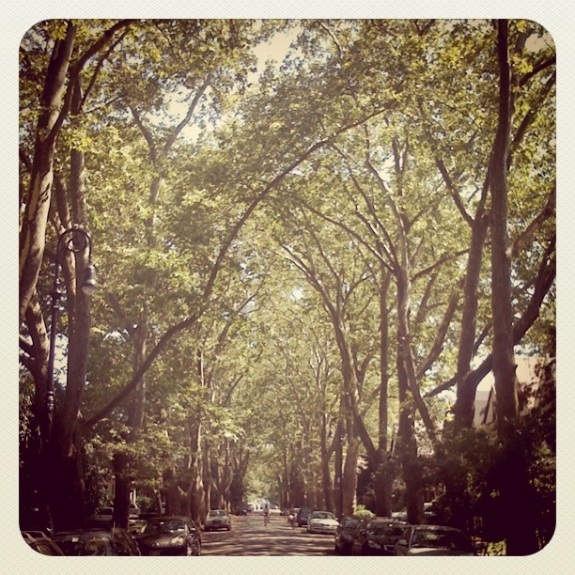 The market came into view rather promptly, jostling me out of my reverie. It was small, with maybe six or seven booths, with farmers selling produce (cherries! blueberries! monstrously large zucchini!), a booth selling freshly baked goods, and others selling meat and line-caught fish. There wasn’t much of a crowd milling around, and as a result the farmers had ample time to chat and describe their goods. 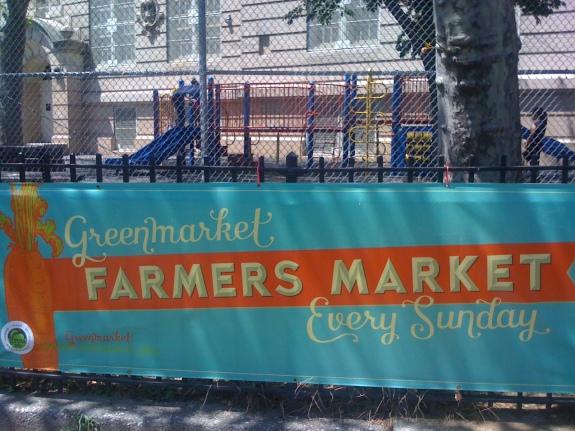 The street the market is on is lined with little restaurants and cafes, and an adorable shop showcasing local gems, as well as gourmet items from across the globe. Needless to say, this little expedition gave my neighborhood an instead upgrade in my eyes. By the end of the week, I was already getting excited for Sunday morning. This time there was also a booth showcasing cheeses from Vermont. When I approached, the lady behind the table was eating a pickle, and, apologizing that her cheese samples were all stashed away in the cooler, she extended the jar to me.

Apparently, I was a little over-zealous on my farmers’ market expeditions, seeing as we are only two people, and that it turns out Yaki did not like a single fruit I came home with. The next day, during a long phone call, I peeled, halved, and quartered where applicable, all of the fruit in our fridge. The apples, plums, and apricots went into a pot to simmer for a compote, along with some long over-ripe peaches. As for the cherries, they were pitted, placed in a bowl, and returned to the fridge.

Googling my next move, I came upon this idea by Martha (who else?!) for cherry mojitos. And although I don’t think there possibly could be a better use for cherries, it came with a “serve immediately” mandate, which, finding myself alone in the house, did not seem like the best of ideas. I’m thinking of toying with the idea, and either making an infused vodka, heavy on the cherries, or suspending the cherries in sugar syrup; something that can be kept for a while, on hand for leisurely visits in the backyard (Maya, that’s an invitation). 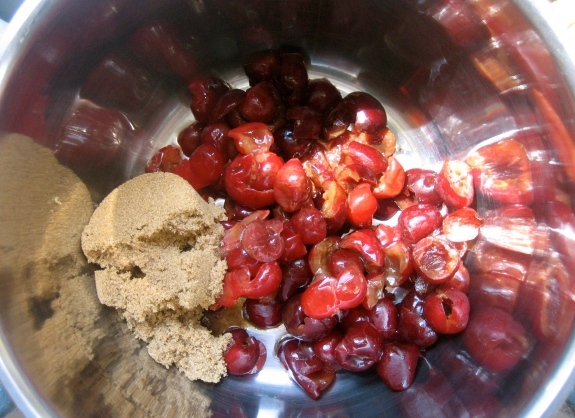 I’ve been feeling a bit scattered lately, so I postponed my experimentation to another time, wanting something quick, to get those fading cherries out of my mind. Also in my scattered brain was Molly’s most recent post, which only reiterated what I already knew the moment I read the following three words in the June issue of Bon Apetit: “suspended-in-summer”; I needed to make Melissa Hamilton and Christopher Hirsheimer’s Strawberry Conserve. Not only did the idea of it appeal to me (with a tagline like that, how could it not?), but their project, Canal House, which has them cooking seasonal food, is so dreamy, I wanted in, even if it was by making their recipe in my kitchen, which instead of overlooking a canal, overlooks a backyard that is a constant reminder of the plants and herbs I did not yet plant. That night, my brain apparently merged the thought of that bowl in the fridge with the idea of the Strawberry Conserve, and when I awoke, I practically squealed “Cherry Conserve”. With my already-pitted bowl, I was just a dumping of some sugar, an occasional stir, and an incredibly quick simmer away from having a tiny part of Canal House on my next toast.

This conserve idea is epic really, especially in the heat of summer when the boiling and stirring required for jam seems a little excessive. In fact, I’m thinking of applying it to blueberries next. If you need any convincing, just read Molly’s gorgeous (as always) post, and if you have your heart set on this cherry one, substitute cherries for strawberries as you do.

As for me, I’m not sure what was worse: having cherries in the fridge, slowly inching their way past their prime, beckoning me to do something with them, or having this jar, stashed away, knowing I am just a teaspoon away from a bright burst of summer. 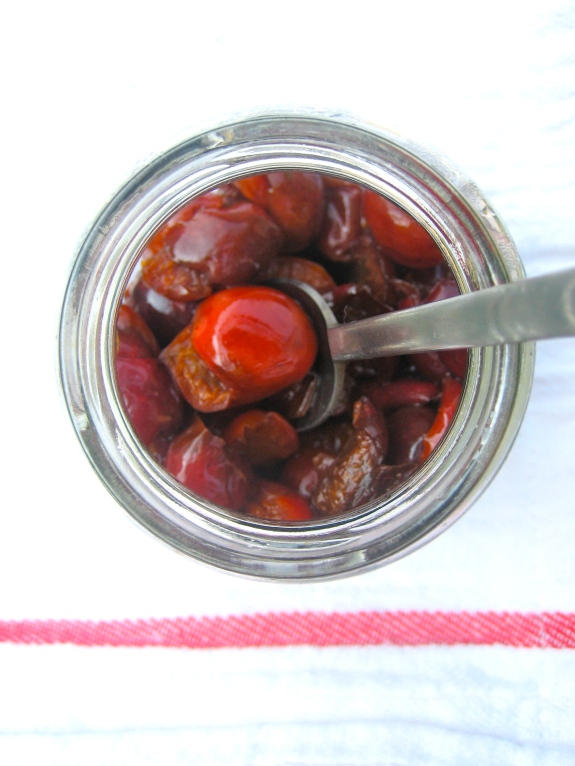 (Via a reminder by Orangette)

Peel (with white pith) of ½ lemon

Combine all of the ingredients in a heavy, wide pot. Cover, and let sit at room temperature, stirring occasionally, for 2 hours. The sugar will dissolve and the cherries will produce a ruby-hued pool of liquid.

Bring the mixture to a simmer over medium heat. Cook, stirring gently, until the cherries are just tender, about 3 minutes. Using a slotted spoon, transfer the cherries to a jar. Continue simmering the liquid until it thickens into a syrupy consistency, 1-2 minutes, or longer, as needed. Discard the lemon peel, and pour the syrup into the jar. Seal, and let cool to room temperature. Chill for up to 1 month.