I’m sitting at my desk watching the weather unfold on the other side of the glass windowpane like some gothic movie on fast-forward. The air is thick with fog, pierced by a heavy, swaying downpour of rain; moody clouds chase patches of grey and black across a low sky. It’s 10 am. My window frames an apartment building paved in red bricks, crowned with a battle-ready parapet. There is a huge tree separating us, and its bare, spindly arms add drama to the scene.*

I’m eating breakfast** and thinking about my grandfather, and how Tunisia figured so prominently for him. I wonder which city I’ll tell my grandchildren about, which city will return to haunt my daydreams and feature as the set of my stories. Los Angeles, the sunny city of my birth? I don’t feel its pull, and yet it has already snuck into stories here. Paris? Jerusalem? Beer-Sheva, encircled by sand dunes, which pulled me in twice, and with which I feel I still have a few unwritten chapters? Brooklyn? Somewhere entirely new I have yet to set foot in?

Yesterday, I met a childhood friend from LA for breakfast in Manhattan (and cities crash into each other). She asked if I feel more at home in the US or in Israel, having lived roughly half of my life in each. I’m asked this often, usually by someone toying with the idea of moving to Israel, in an attempt to eek out of my experience how easy it will be for their children to adjust. (Do I look well-adjusted to you?) I feel ambivalent. Which is really a less involved, less exposed way of saying I feel like I’m hovering somewhere above the Atlantic, twisted roots dangling from the soles of my feet. In Israel, feelings of being an outsider recede into corners, breeding dust bunnies, only to dart out when I mention my name. I always have to repeat it, enunciate it, and, if the person opposite me is still squinting, give an example of its use (you know, like the children’s book? Or if they look more tv-bound than literary: as in Sex and the City). And with each clarification, I feel a line demarcating myself from those who have a claim to the land.

Brooklyn and Israel share their coarse, rough edges, the impatience thick above the streets, the multitudes of people hailing from elsewhere. Here, there’s a sense that difference is taken as a given, and isn’t lingered upon. Maybe the city desensitizes to it, the subway making its way over the bridge, men in suits sliding into older men with long grey beards and chunky rings, teens with ripped tights, women carrying heels in little bags, headphones, iphones, open books everywhere. In Israel, there’s a sense that someone is stirring that ever-simmering “melting pot”, from which we emerge accent-less, Israeli. And every time I voice my name, I get shoved back into that pot, like “oh no, in you go, you’re not ready yet”.

In 2008, when missiles exploded onto Beer-Sheva, and air raid sirens ended my ability to sleep through the night, I called the campus helpline. The person who answered the phone asked if I had served in the army during the “operation”, or if a missile had fallen on my house, or if I had been wounded. No, I said, no, no, no. “What’s wrong then?” she asked. I responded that I was just scared of the sirens and the missiles, and that I couldn’t fall asleep at night, and that when things got too silent my soul clamored to get out of my skin. “Oh”, she said. She put my name on a list, and said she would see if anyone else called with anything similar. A few weeks later, she called and said that no one else had called, and that she hopes I feel better. I didn’t.

In New York, the subways carry signs: Where were you on 9/11? Did you know someone? Where you in the neighborhood? Were you in NY? Call this number for help. 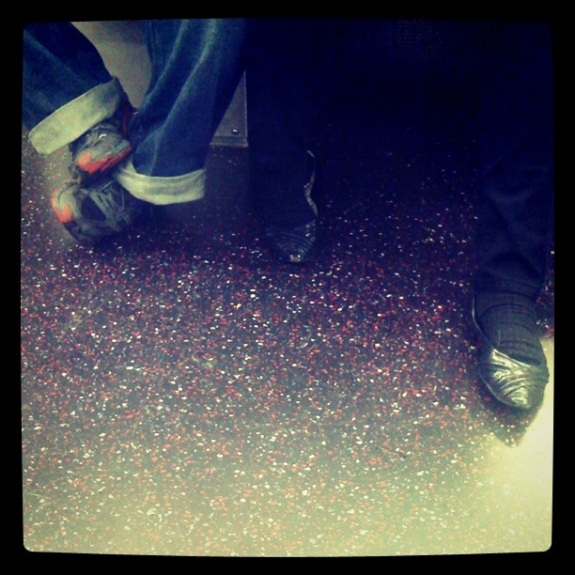 Los Angeles, New York, Paris- my name meets no resistance. In French, it rolls off the tongue softly, and spoken by a stranger, it carries a certain warmth to it, reminding me of my mother, my grandmother. The word lingers, full of melody: Cha-r-lotte. In English, it picks up speed, shaking off a little of its lacy femininity: Char-lette.

In Israel, the “r” is pivotal. Charlotte is twisted into Sher-lot, with a guttaral push on the “r”. Hebrew has an impatient beat to it, and Charlotte stands out of the fast-paced sentence like a red flag, raising eyebrows.

“You take delight not in a city’s seven or seventy wonders, but in the answer it gives to a question of yours.” –from Invisible Cities by Italo Calvino (via)

*Details: two slices of walnut-raisin rye bread, toasted, the raisins plump and juicy, slathered unevenly with crème fraiche. I could have stopped there, but I couldn’t resist a drizzle of honey from the edge of a long silver spoon.

**This was, um, Thursday? Today white, bright light streams in through the windows, like it’s not mind-numbingly cold out. (I’m told it most certainly is, and as I have no plans of emerging to find out, I’ll take his word for it). I waited with this post, as I felt unsure of posting it here- tying it to a recipe felt too artificial (I toyed with the following: something with root vegetables, something warm and comforting, salad, cookies.). Also, I was a little scared of causing you all to click “unfollow” en masse.