In the Streets of Paris 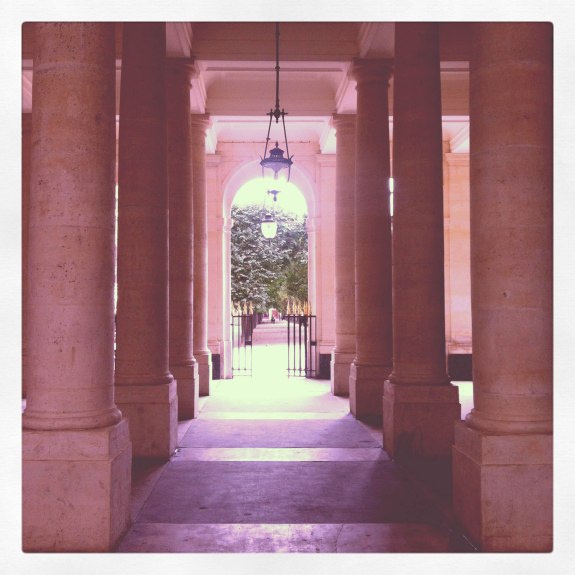 I’ve been thinking about a proper entry into Paris, this City of Light that seems to have such a hold on our collective imagination, on our fantasies, as to have become practically cliché. Everywhere you turn, magazines tout: The Paris Edition! The Best Places to Go in Paris! The Ultimate Paris Guide! Macarons: Revealed. There’s so much hype surrounding Paris (and all things French), that there’s almost a sense of over-saturation. And yet, as I wander its streets, I can feel its magic enter the tips of my fingers, feel my eyes opening wide at all of its beauty: its ornate facades- goddesses arching their backs, their hands behind their heads, the folds of their gowns fluttering at their toes- balconies held up by playful, round-cheeked cherubs. Walking in its streets, I pass cafes where Hemingway and Sartre and Simone de Beauvoir (and so many others) used to sit and write: all of this history coming to life.

I met my cousin for lunch, and afterwards we went for a long walk, popping into the Palais Royal, where little boutiques line an inner courtyard filled with trees and sculptures. We peered into the quaintest little shops: glove makers, medal collectors, fanciful displays of antique jewelry. A door opened as we walked by a little parfumerie, on its own, and we stepped into the dark room, saleswomen with chignons at the nape of their necks standing behind black lacquered tables holding up ornate glass bottles, and offering us whiffs of scent on slender white papers. 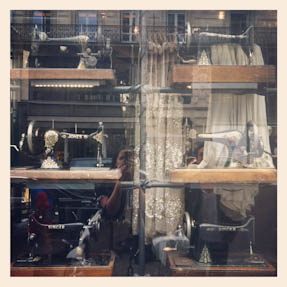 I walked the streets with my cousin and also with my aunt and uncle, each of them Parisian, pointing out landmarks and lesser known histories with a casual raise of their hands, leading me into tucked away gardens and their favorite haunts. We drank tea at Ralph Lauren, where raspberry branches, the pink little berries still on, formed a lush bouquet at the bar. We strolled by stores with local olive oils on tap, and walked into Mariage Freres– the scent of tea hitting you as you walk in with its heady, intoxicating perfume.

We took long, leisurely strolls through the Luxembourg Gardens, the color palettes changing in each section, the light golden. People stretched out on chairs in a curving line by the pond, reading, the sun on their shoulders. 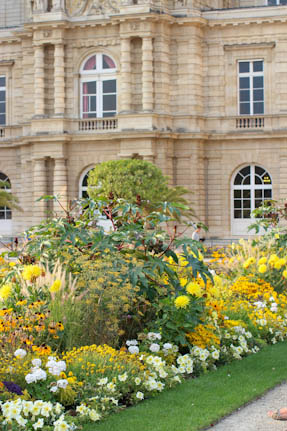 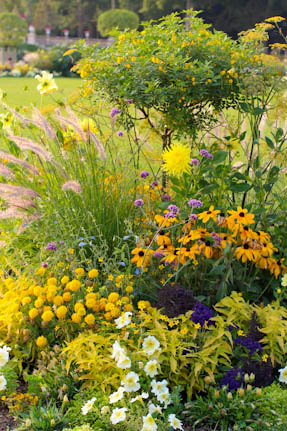 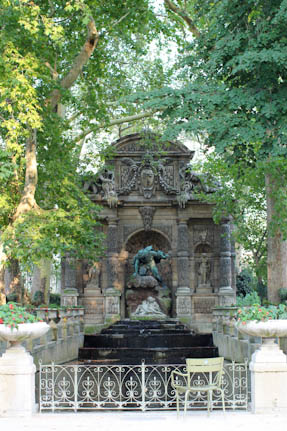 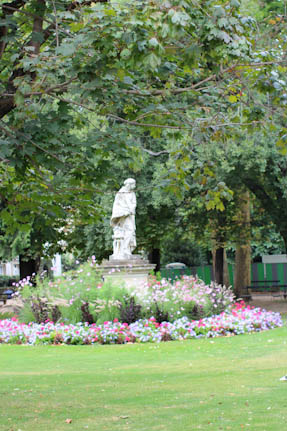 At eighteen, the summer after we had graduated high school, my best friend and I had headed out to Paris for a week. We stayed alone in the apartment of an aunt and uncle, and we descended upon the place like the just-post-high-school kids that we were. Alone! No adults! In Paris! All of this independence offset by feelings of obligation to visit my extended family; it was a weird, hilarious combination. 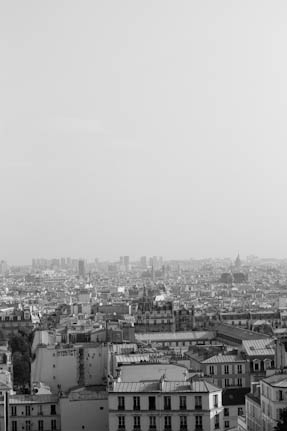 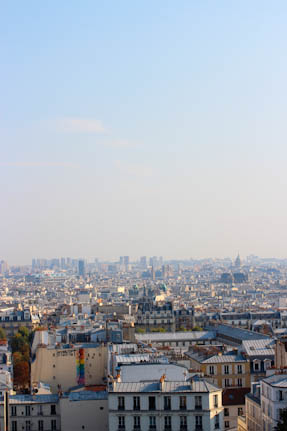 One night, upon returning from dinner, we found our street blocked by film production trailers, their big lights illuminating the evening sky. It turned out they were producing a film with Gerard Depardieu, and we managed to snag a picture with him. Then we came back down, glasses of wine in hand, and watched the scene unfold, sitting on the sidewalk in our pajamas, violating all kinds of Parisian etiquette. We climbed onto statues, and took silly pictures, giggling the entire time, like the teenagers that we were, without a care in the world.

Paris, for me, is a series of transatlantic migrations to visit my family, coming off of the plane and into the arms of grandparents and aunts and uncles; the place we return to gather as a family for weddings and funerals, and that one spectacular summer at eighteen. It’s where I spent part of my honeymoon with Yaki, in the tiny apartment my mother and her sisters grew up in. It felt cramped just the two of us in this one bedroom space that had housed six; the walls feeling thin against the vast beauty of the city. And it’s the place I came back to, now, for solace, at the end of a difficult summer. 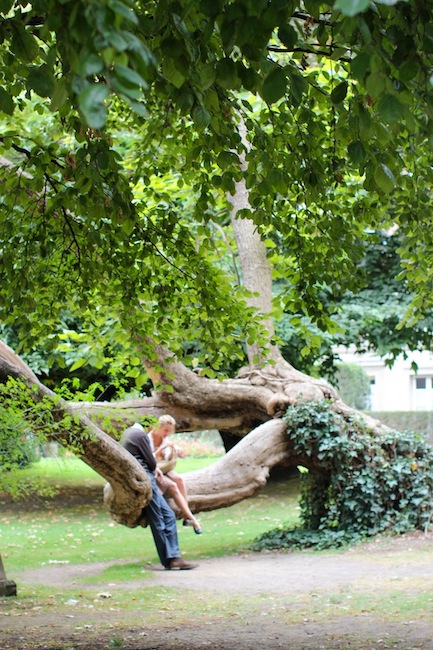 On my last day in Paris, I wandered into the Ile Saint-Louis, and headed into Berthillon for some of their famous ice-cream. I ordered a scoop of hazelnut with candied oranges and a scoop of caramel from their ever-changing list of seasonal flavors. Ice-cream in hand, I walked to one of the nearby bridges, and sat up on the ledge. The caramel was by far my favorite, soft and creamy, with tiny bits of crystallized caramel popping on my tongue like late-summer fireworks, as I watched the sun’s last rays glimmering on the Seine and bouncing off the buildings, turning the landscape into a pastel watercolor. 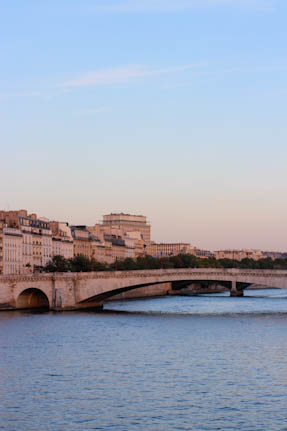 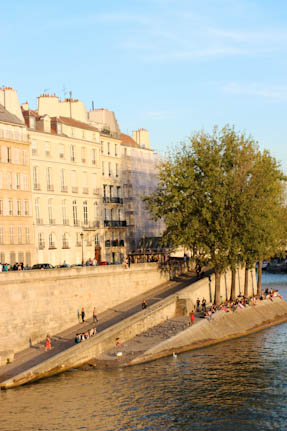 for the simple syrup:

For the simple syrup: Bring the brown sugar and the water to a boil over medium heat, stirring to dissolve the sugar. Remove from heat and let cool.

For the lemonade: Juice 5 of the lemons, reserving one for slicing.

In a medium-sized pitcher, combine the lemon juice, ginger, 4 cups water, and half of the simple syrup. Stir well, and taste. Add more simple syrup if desired (I had about 1/4 cup left).

Choose tall thin glasses that can fit a slice of lemon snugly horizontally. (The lemon works as a barrier to keep the ginger from reaching the sipper’s mouth). Pour the lemonade into the glasses, add ice, and top each with a lemon slice.