One of my favorite things to do in a city is visit its farmers’ markets. I love seeing what grows in the region, chatting with the vendors and discovering new things- from fruits I’ve never tasted before (like the “cage d’amour” above*) to local cheeses and specialties. In Paris, I wandered through the Marché Bio on Boulevard Raspail- all of the produce local and organic.

There were big, oddly-shaped orbs of smoked mozarella dangling from hooks, an array of cheeses with the funkiest looking rinds, long branches of bay leaves, beans of the prettiest marbled pink, and bright orange squash signaling the arrival of fall. 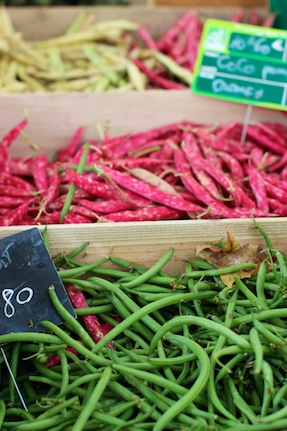 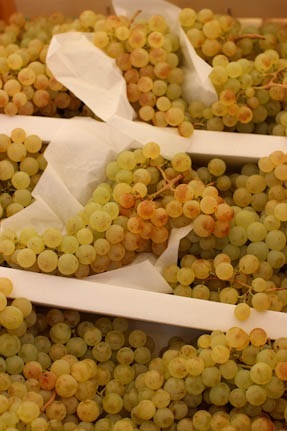 One of the things I regretted most when leaving New York for the summer was that I would miss the abundance of my neighborhood farmers’ market. After a year of (mostly) root vegetables, pears and apples, I couldn’t bear leaving when the produce was just kicking into high gear. I love the excitement of the market- not knowing what you’ll get, allowing yourself to be surprised (and challenged) week after week; trying new things, as opposed to reaching for the same things again and again as you might in a supermarket. Just before leaving, at my market in Brooklyn, I spotted small boxes of zucchini blossoms and grabbed some right away. As I placed them in my bag, I knew they were destined for a pizza I had been fantasizing about ever since I first saw a- quite glorious- picture of it.

Armed with my blossoms, I hunted down the burrata the recipe calls for, and set to work. The dough comes together easily, as does the sauce- for which you just place the ingredients in the bowl of a food processor, and purée. The result is bright and light in a way that cooked pizza sauces aren’t, and makes a beautiful deep red backdrop for the blossoms. I topped one of the pizzas with scoops of burrata, as per the recipe, and as we bit into the pizza, just minutes out of the oven, the cold, creamy burrata contrasted headily with the warm, crisp, chewy crust. For the second pie, I grated burrata onto the pizza before placing it in the oven, and we actually liked that one better- the blossoms visible beneath a thin blanket of bubbling, golden cheese. If you opt for the latter route, I think mozzarella would be a fine substitution. Whichever route you take, it’s quite the celebration.

*”Cage d’amour”: French for cage of love, or love in a cage. The papery exterior conceals a tart, bright orange fruit. This fruit is also known as a Chinese Lantern in English. And there you have it: the French propensity for romance, even at the farmers’ market.

A few notes: I was slightly alarmed when I read the recipe called for *60* squash blossoms. I made the full dough and sauce recipes, but only topped two pizzas with squash blossoms + burrata, reserving the other two for other toppings. Also, I made one of the pizza with scoops of burrata added to the cooked pizza, as per the recipe, while I topped a second pizza with grated burrata before placing it in the oven (see different pictures above). We actually prefered the latter, and I think that, if going that route, regular mozzarella would be a fine substitute.

1. In a large bowl, combine 1 tbsp. oil, yeast, sugar, salt, and 2 cups 115˚ water, and let sit until foamy, about 10 to 12 minutes. Stir in the flour to form a dough. Transfer the dough to a floured surface, and knead until smooth, about 8 to 10 minutes. Slice the dough into four equal portions, and roll each into a ball. Place the balls on a floured baking sheet. Cover with plastic wrap, and let sit in a warm place until soft and tripled in size, about 2 to 3 hours.

2. Meanwhile, make the sauce: In the bowl of a food processor, puree the tomatoes, olive oil, basil, garlic and onion. Season with salt and pepper. Set aside.

3. If using a pizza stone, place it on a rack in the lower third of the oven. (I use a large, upside-down cookie sheet). Heat oven to 500F/ 260C for 1 hour. Dust a large piece of parchment paper (16 ½” x 12 ¼”) with flour, and lightly flour your hands. Place a ball of dough in the center and, working from the center, use your fingertips to press, pat, and stretch the dough into a 10″ circle, leaving a rim of thicker dough about 1” thick. Cover dough with a tea towel, and let rest for 15 minutes. Uncover, and brush the edges of the dough with 2 tbsp. oil, and season with salt. Spread ½ cup pizza sauce over dough, leaving a 1″ border. Arrange 15 squash blossoms over the sauce in concentric circles. Transfer the pizza, still on the parchment paper, by gripping the paper at opposite corners, and lay it carefully atop the preheated pizza stone (or cookie sheet). Bake until golden brown, about 10 to 14 minutes. Remove pizza with a spatula. Top with spoonfuls of burrata, and drizzle with olive oil. Repeat to make 4 pizzas.