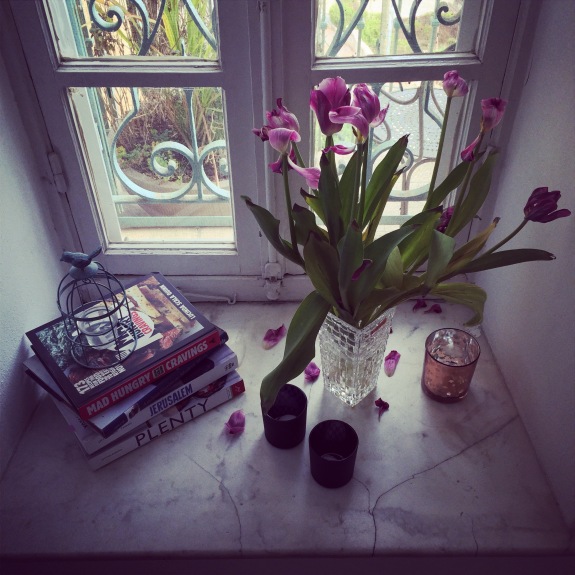 He asks: “Why don’t you write anymore?”

Later: “But you follow fifty food blogs? What about all of that time you spend reading?”

Setting aside time to write is good for other things: the ironing you didn’t do in six months, rubbing your wooden cutting boards with coconut oil, taking a walk.

I’ve been scared of the sirens again. Two, three missiles on the south and that’s it. I can’t breathe well, I’m scared all of the time, my brain is back on that tortuous “what if” loop.

He says: “The chance of being hit by a missile is like winning the lottery”.

We’re sitting in his apartment and he’s holding a tiny baby cat that’s curled against his chest. The balcony doors are open wide onto a monastery with an iron flag that has 1817 carved on it. His floors have the same marble that runs into my kitchen and seeps out into the hallway, the same high ceilings, the same majestic arched windows; two Hebrew letters that spell miracle hang above the dining room table.

I feel it beneath my shoulder blades, stretching down to my legs; the weight heavy on my shoulders, balling up my chest. If I’m not in control then… 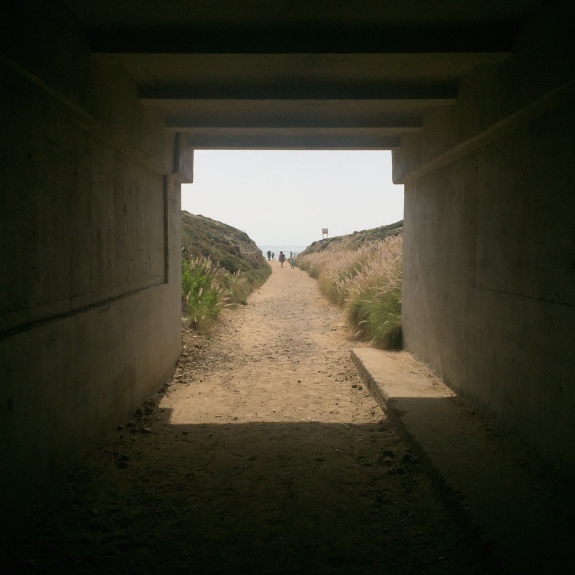 I’m scrolling through my facebook feed and there’s a picture of the night sky lit up by a missile. I click: a missile on Ashdod. Really? Again?

She sleeps over and the next morning she says: your breathing was weird. I wake up nauseous, cloudy.

At first, nothing, like I’m the only crazy one, the only crazy voice. And then, as the sirens increase- there’s one, two others asking what to do if war breaks out. I hear a child asking his mother on the street, and it doesn’t make me feel better (there are other people out there who are scared like me?!) it makes it worse- CLEARLY THERE IS SOMETHING TO BE AFRAID OF.

I spend the night at my parents’ house, my mom walks into my room, sits on the edge of the bed, says: “Why are you scared? I’m not scared. And I wasn’t afraid of the earthquakes either”.

The fear bunches up behind my eyes, making them heavy. I squint and my eyes are bloodshot. 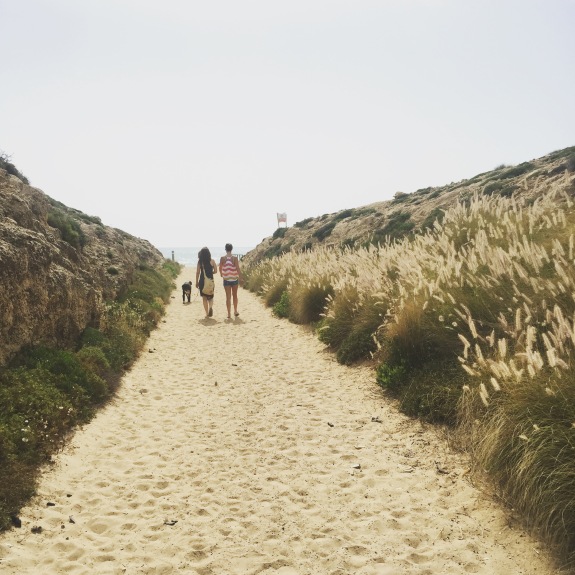 I sit with a friend at a café. She says: “Want to hear one of my craziest phobias?”

I lean in, of course. Lately I’ve become a sponge for phobias, anxieties, fear. The America of phobias: GIVE THEM TO ME.

Anything so that I’m not alone.

She looks around, says: “When I swim I look around all the time to make sure there are no sharks. Even when I’m in a pool, in a closed room, far from the ocean”.

“Ah,” I say, and I look around for my empathy. Except that being in the pool? That is how my ENTIRE LIFE FEELS.

So you know, don’t go swimming, but me: I’M ALIVE.

August 10: My family decides to take a family vacation to Ashdod.

The deeper I dig into my fear of sirens the more I find. It’s like this bottomless treasure trove, there’s always another layer, always more, more, more.

Now, this: the fear of the sirens, the fear of flying- they are all rooted in him, tied to him.

When people ask how long it’s been since my divorce I want to say five years, but then I conjure up the image of my chubby, blond-curled nephew who smiles up into his eyes and for whose birth I came back, and I answer: three.

I’m surprised when I find it wide open, its spine splayed.

Months go by and he doesn’t cross my mind, but then I’m stretched out on the couch, and the edges of my mind start aching for caffeine, and wouldn’t it be amazing if he could just come out of the kitchen and bring it to me? Sit down on the couch next to me, and I would prop my legs up on his lap, and he would stroke my legs reassuringly. (and then, what? I know how this story ends).

It would be so easy to slip back into intimacy with him. 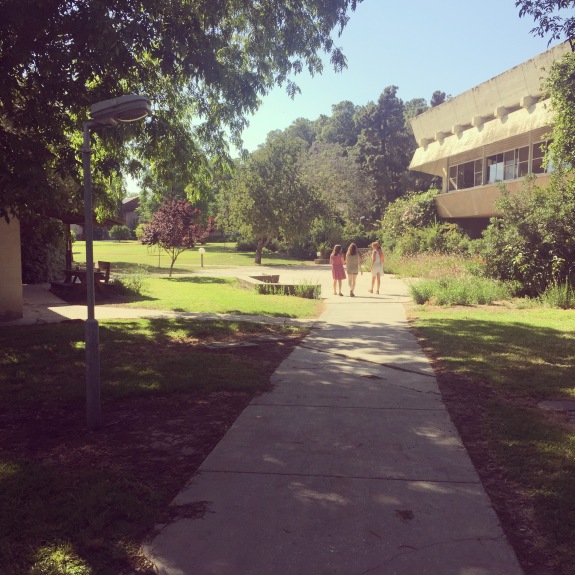 I sit in a circle of women beneath tall trees, a murky river at our feet, mosquitos biting my skin. We’re here to focus on a fear, maybe/hopefully let it go. (Is it that easy?) I’ve been dreaming of sandy beaches, skin peeling from the sun, feet sore from walking, eyes rolled back in bliss. I write fear of flying in capital letters. For the next exercise, I have to choose something I’ve actually had a negative experience with, and somehow, there it is again: FEAR OF THE SIRENS.

As it turns out, he’s the star of both. The chances of a missile hitting you are one to a million, but it hit his cousins. Flying is safer than driving, but that flight to Zanzibar with him.

Why am I holding onto these things that are not even my story?

For a while after my divorce, I smoked Winston Lights, his cigarettes. I couldn’t release the scent of him from my fingers.

She asks: “What would comfort you if a siren sounded? What would make it easier for you to fly?”

To be held, to not be alone, to have someone come with me.

And maybe that’s where the trauma is: not in the fact that by killing his cousin, it made my mind short circuit on probability, making it feel like all missiles have a GPS attached to it with my exact coordinates, but the fact that when the sirens were going off, and I would curl up into a ball, he would be outside barbeque-ing. The trauma then was of finding myself alone.

I’m in yoga class and the teacher is this strong, totally zen guy. When he demonstrates the poses you can see all of the muscles carved out in his legs and arms. I’m in this pose where you spread your legs wide, then lean down to the right, place the fingers of your right hand on the floor and stretch your left hand up, turn your gaze towards it and lift your left leg up. I’m on the verge of falling.

He whispers: “Be brave.” 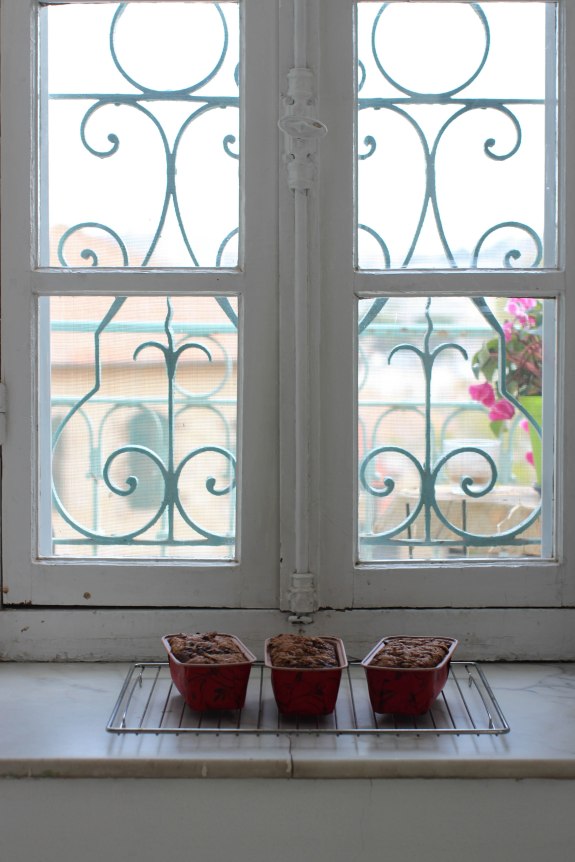 *This is an old post. By the time I was finished with it, it was already stabbing season here. Because: never a dull moment. Up next.

This is my favorite banana bread. It comes together in less than fifteen minutes, in just one bowl- just the thing when you don’t have much energy and need some comfort. It freezes well, you know, for tomorrow.

1.5 cups all-purpose flour (I use spelt or whole wheat)

Preheat the oven to 375F/190C. Butter or spray an 8-inch square pan, or loaf pan. (In the pictures here, I used three mini loaf pans).
In a medium bowl, mash the bananas well with a fork. Add the eggs, and stir well to combine. Add the flour, sugar, baking soda, cinnamon, and vanilla, and stir until incorporated. Add ¾ cup of the chocolate chips, and stir briefly. Pour the batter into the prepared pan. Set aside.

In a small bowl, stir together the topping ingredients. Sprinkle the mixture evenly over the batter in the pan, and top with the remaining ¼ cup chocolate chips.

Bake for 35-40 minutes (30-35 min for mini loaves), or until a toothpick inserted into the center comes out clean. Place the pan on a wire rack, and let cool for at least 15 minutes before serving. 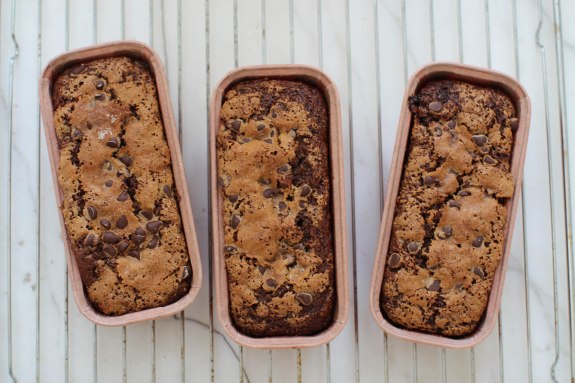