He takes me to the water tank

He takes me to the water tank. We walk through fields of wheat, tall and gold with the setting sun. My hair is long, and still a little red from that time I dyed it after our first date. He’s wearing jeans and a short black t-shirt. There’s a ladder leaning up the side of the tank; he says from the top there’s a view of all of Yavne. We climb up and our feet dangle over the rusty metal sides.  The view stretches out far and wide, at the edges stone houses lay in ruins. He points to them, and tells me that his grandmother exchanged her old stone house for a modern apartment in the housing projects, a house with fields. He says: “Imagine what that would have been worth now”.

He takes me by the hand and leads me back to the pickup truck. I like the contrast between his rough exterior and how gentle he is with me.

He has one hand on the wheel, the other on my thigh; sunglasses shield his light green eyes. He reaches for the pack of cigarettes, places one between his lips, fiddles with the car lighter, twisting it around the end of his cigarette until the flame catches. When we turn onto his parents’ street, neighbors are out washing their cars, walking their dogs, lingering in the last rays of sun. They come up to the windows to say hello.

The door to his parent’s house is open, scents of cooking waft out. His mother rushes out to greet us, calling his name.

She sets things out for us on the kitchen table, even though the large white table in the dining room is already set for dinner and we’ll be eating there soon. She’s been cooking all day, and there’s a big, puffy, golden roll of pastry stuffed with beef, grilled chicken with garlic and rosemary, smoky roasted eggplant, matbucha shiny with oil. She sets down the heavy, shallow pot with fish drowning in a spicy Moroccan sauce, and he drags a piece of challah through it, leaving a trail in the deep red sauce, the bread dripping as he brings it to his mouth.

Later he’ll go out with his friends and I’ll wait for him in his childhood bedroom flipping through magazines. The sheets have this particular damp smell to them; his mother often forgets them in the washing machine. The room is his little sister’s now and there’s a turquoise wall, thin lace curtains at the window, a big pile of stuffed animals. I can hear the television on in the other rooms.

They’ll ask: Did you see any signs along the way? I didn’t.

Beersheba: It’s late at night when his friend comes over; the bread has just come out of the oven and I set it out on a cutting board, with a large serrated knife. I bring out a plate of supermarket hummus doctored up with olive oil and cumin, some olives, pickles, cold beers.

They tear into the ring of bread as they talk. When I sit down with them, he asks: “Wouldn’t you want to have your children playing on the floor in front of you?”

There’s a big, worn coffee table, old furniture from a couple now in an assisted living community, thick curtains that look like parrots threw up all over them; outside the cabinets that line the yard are spray painted in the wrong shade of blue, the paint runny and sloppy, the job half finished.

Over the course of our time together, we periodically check in with each other: “Would you like a child now?” As if we were talking about that new piece of furniture we couldn’t even afford.

So far one of us has always said no.

I don’t remember where I slept that last month, right before we moved to New York. He went ahead, and I stayed back a bit, waiting for the birth of the first grandchild who was not mine. The colossal job of having to finish packing alone- boxes upon boxes, the uncertainty of not knowing where we would be and for how long making it impossible to sort. That final meeting with the landlady who, in a fit of anger, threw her cellphone against the wall, smashing it to pieces.

I remember missing him, the safety of his body, and then, arriving on the other side: tired and worn, his arms a breath of relief.

There: an oversized Ikea couch, the yard empty and brown, save for upturned kids’ furniture left behind by a previous tenant. He cooks eggs in the kitchen, makes his Moroccan pasta, he still wears the pajama bottoms I bought him for the first birthday we were together. We binge on local foods, the farmer’s market on Sundays, the huge aisles at Safeway, the rows of refrigerated Israeli salads at the neighborhood Kosher Mart. There’s cheap Chinese takeout, greasy and loaded with msg, and lots of television- movies, series, nostalgia for things in Hebrew- a big screen in the living room, one at the foot of our bed. My fears morph from one thing to the next, the fear of sirens is now a fear of rats in the basement, and drive-by shootings through the huge bay windows that frame our bedroom.

My mind is never quiet.

Manhattan. An anniversary, maybe our fifth? I book a hotel in the city- an indoor garden, string lights, downright faeric. We have reservations at a fancy place for dinner. He sits across from me- the white tablecloth, the lone candle, New York all around us, close and dazzling- he has such a distant look in his eyes.

Days before: torture at the hands of a Ukranian woman in a small room in a strange part of town, via one of those discount websites. Room service, the television remote, he doesn’t touch me.

I don’t remember when I stopped cooking for him; when we stopped eating together. He would go into the kitchen and make himself a sandwich and sit down in front of the television, and what about dinner? But somewhere beneath that lay the faultline of our marriage, and what was already a pretty great divide was beginning to shake. I ate to stuff down all of those feelings- Entenmann’s, Ben & Jerry’s, the American classics. I would hide half empty boxes around the house, as if he couldn’t see the layers of fat growing on me. Our conversations centered around baby or divorce. I don’t remember if we spoke about anything else.

We kept this shabby black briefcase in a back corner of the coat closet with our savings in ziploc bags. One day, he took it out, and started counting the money.

He looked at me with one of those thick, impenetrable looks and walked out, slamming the door.

They said: Leave him.

He was gone for a few hours and I looked around our Ikea house, contemplating what I would take with me.

He said: You’ll never be able to live alone, you don’t even know how to switch a light bulb. You’re scared of everything. Also: you love me too much.

He said: If you go, I’ll come and call for you beneath the balcony of your bedroom at your parents’ house- I’ll never let you go. [Spoiler: he doesn’t].

He had seen the parts of me that were broken; despite what they had said: he had loved me anyways. I was still so young and everything was still so new and that alone felt so gigantic.

We drive to the beach. The Atlantic stretches out before us, all rolling waves and seagulls, not another soul. Huge rushes obscure the road. The sand is clean and white; it’s still winter. The moment I unpack our picnic he wants to leave.

I don’t remember when he stopped holding my hand, but there was this one time we went on a walk in Brooklyn at dusk, and I reached for his hand, and he pulled it away. Kids played on corners, time stretched out before us, everything was quiet. The evening lay ahead, long and free.

They say: How is it possible that you’re over a six year marriage? You must be repressing your anger, your sadness, you must be in denial. They probe, interrogate, they’d like to see me cry.

A picture of them together surfaces on social media. I scroll through her profile. There’s a selfie of her in a bedroom, captioned “Good morning, New York!” I take it in: the closets, the heavy curtains, the pattern on the wood floors, and it hits me with a thud: our bedroom.

Did he pick her up from the airport and take her to that Japanese restaurant with the crimson awnings? Did she wake up in the morning and put her fingers into the jars of cream I left behind? Did he tell her who painted the paintings on the walls, did he explain the sculpture of tulips in the living room? Are they still there?

I wonder if they talk the way we never did, their souls twisting deep into each other; if it works differently for them.

I used to wonder if I would tell him when I was in a serious relationship, in those scenarios I had always assumed I would be the one calling.

She listens, then asks: why are you still keeping him alive? 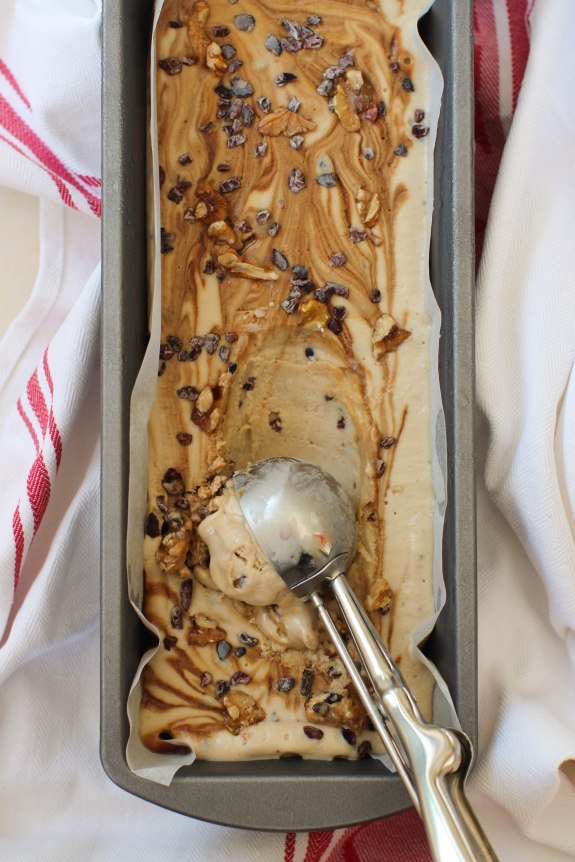 From Sarah Britton’s My New Roots Cookbook, via The First Mess

1 vanilla bean, sliced down the middle and seeds scraped out (or 1 tsp vanilla extract)

Remove the bananas from the freezer. Drain and rinse the cashews.

Combine the drained cashews and 1/2 cup filtered water in a blender and blend on high speed until you have a completely smooth cream (I added close to 1 cup of water).

Add the vanilla, frozen banana chunks, sea salt, maple syrup, coconut oil and lemon juice to the blender. Turn to the highest setting and blend until smooth. Taste for sweetness and add more maple syrup if desired. Fold in the chopped walnuts and cacao nibs. Pour the mixture into a glass or metal container. Drizzle with date syrup, and twirl it a bit with a knife; garnish with walnuts and cacao nibs, and freeze for at least 4 hours.

Remove the ice cream from the freezer 5 to 10 minutes before serving. Enjoy.